While loan approval rates for small businesses are increasing at big banks, the index also shows that they are receiving more loan applications as well.  However, the amount is negligible, at best.

Why are approval rates increasing at big banks?  Are there other forces at play?

Increasing loan approval rates at the big banks could be reflecting in part, the improving economy, at least as far as employment rates are concerned ().  They could also be reflecting the strength of their recovery after the financial crisis of 2008. The big banks after all, did receive an exceedingly generous bailout package, courtesy of American taxpayers ().

Despite the increase in loan approval rates by big banks, we can’t lose site of the fact that there is a massive shift taking place in the financial services and banking industry.  For the first time, the established financial services industry or banks have competition in the form of fintech companies.

‘Fintech’, short for financial technology, simply put are the computer programs and applications used to support or enable banking and financial services.  It previously used to refer to the ‘archaic’ plumbing and infrastructure that made up the back office operations of banks and financial services companies.  These were systems that were designed and built decades ago with many based upon ‘mainframe’ technology. Thirty and forty years later, these same systems are the backbone of what is the current financial system().

Around 2010, the definition of ‘fintech’ was expanded to include technological innovation in the financial services industry.  This includes financial education, retail banking, wealth management, personal and business lending as well as cryptocurrencies and blockchains.  Cryptocurrencies and blockchain technology fall within the ‘fintech’ umbrella since they are, at their core payment mechanisms.

While fintech has been around for awhile now, it is only within the last few years that it has become increasingly popular on several fronts including the banking and financial industry, amongst consumers and with investors.

Response by the financial services industry

Changing consumer preferences towards ‘mobile’ and self-service banking combined with a tight regulatory environment has limited the finance and banking industry to expand and pursue growth opportunities.  As a result, new technologies and innovation in the financial and banking industry has been driven by the fintech companies.

Examples of the transformation of the financial sector in terms of the delivery of financial services includes:

The financial and banking industries realize that fintech poses a threat to their sales and revenues and are responding accordingly.  They have mounted aggressive acquisition campaigns to buy the technology and integrate it into their revenue portfolios.  This trend is reflected in fintech investments discussed below.

Consumers around the World are rapidly integrating fintech into their financial lives.  Ernst and Young completed an extensive survey of 22,000 digitally active consumers across 20 different developing and mature markets.   The study identified four key consumer themes, including:

Amongst survey respondents, the percentage of digitally active consumers who have used each product is as follows:

The main take-away from the study was that fintech adoption has reached a ‘tipping point’ into mainstream adoption across societies.

A key thing to keep in mind is that in many instances, revenues going into fintech are revenues that are not going banks and established financial intermediaries. 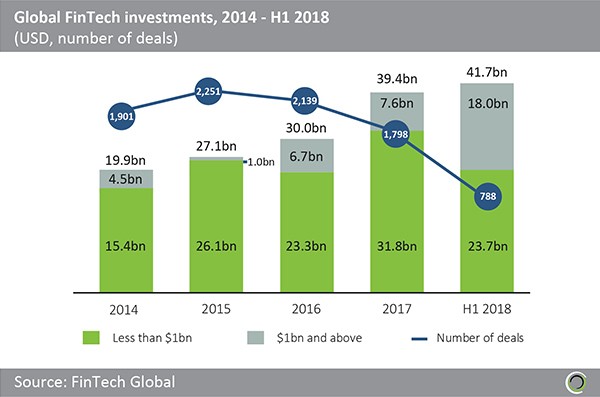 Growth rates in terms of money invested show no signs of slowing down.  In the first half of 2018, the amount invested in fintech exceeded the total invested for all of last year, $41.7 billion over 789 deals.

It is worthwhile to point out that the number of deals has been steadily declining from a peak of 2,251 deals in 2015 to 789 deals, so far this year.  The increasing transaction size for each deal,, combined with increasing consumer adoption rates is indicative of a maturing fintech sector.

Improving loan approval rates and recent increasing deal flow to big banks does not discount the potential threat that fintech represents to the financial and banking industries.

Interest in fintech is increasing on several fronts, including:

In the end, when there is increasing competition within an industry, it is the consumer that ultimately benefits.

To contact a Zip Capital Group Small Business Specialist, call 800-795-3919.  You can also apply for a merchant cash advance online.