Just four short months later, storm clouds are looming on the horizon. The trade war with China continues with no apparent end in sight. The same can be said of the government shutdown, which is the longest on record as of this writing. Action by the Federal Reserve Bank in the form of interest rate increases are leaving investors increasingly jittery after a significant bull run.

This begs the question, what is small business sentiment now that there are some obstacles ahead?

According to the National Federation of Independent Business CEO, Juanita Duggan, “optimism among small business owners continues to push record highs, but they need more workers to generate sales, provide services, and complete projects”. Since it is primarily small business that creates new jobs, she ads “it will be Main Street that will continue to drive economic growth.”

The NFIB released the results of its survey of small business owners conducted in December 2018 assessing small business sentiment. The NFIB Small Business Optimism Index has been completing quarterly surveys of members since 1973 and monthly surveys since 1986 to summarize small business economic trends.

Surveys are sent out monthly to members and released the second week of every month.

Results show that small business optimism drifted downward 0.4 points from a total score of 104.4 recorded when the survey was last conducted in November 2018. Results show that the lack of availability of human capital continues to persist. 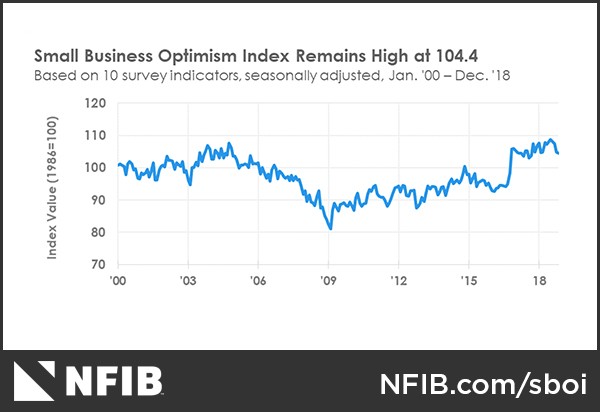 On the inventory front, plans to increase investments in inventory increased as well. Overall, expected sales growth and business conditions accounted for the modest decline.

Key points of the Survey 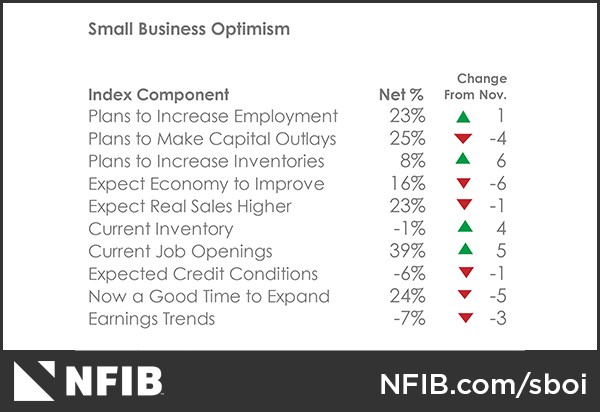 According to the survey, job creation was solid in December with just .25 workers added per firm surveyed. In other words, one in four small businesses surveyed added new jobs. This number includes those respondents who did not add new employees to the payroll.

Sixty percent of small businesses surveyed reported trying to hire new employees. This is unchanged over the previous survey. Fifty four percent or ninety percent of those surveyed hiring or looking to hire could not find qualified candidates for positions that they were trying to fill 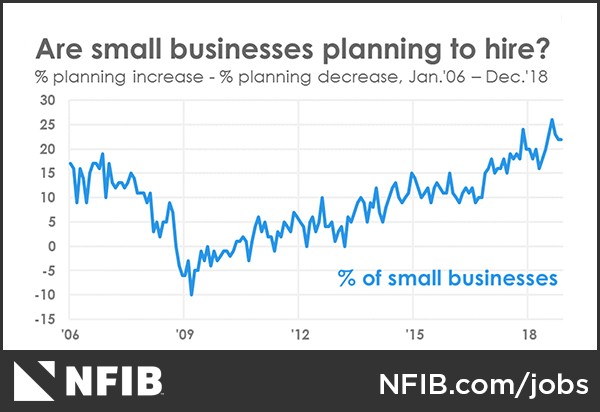 What is the single most pressing business owner for twenty three percent of survey respondents? Not being able to find qualified workers. This is down 2 points from the previous survey, a record high reading. 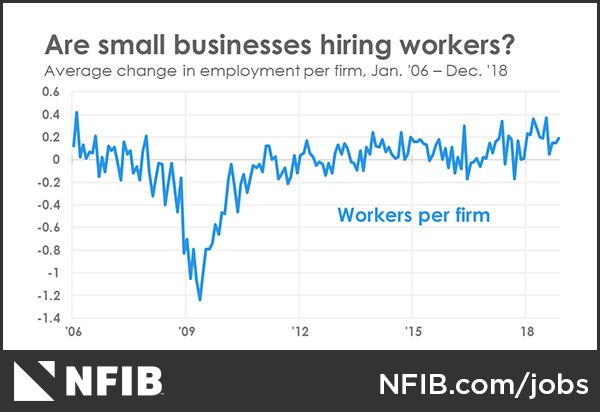 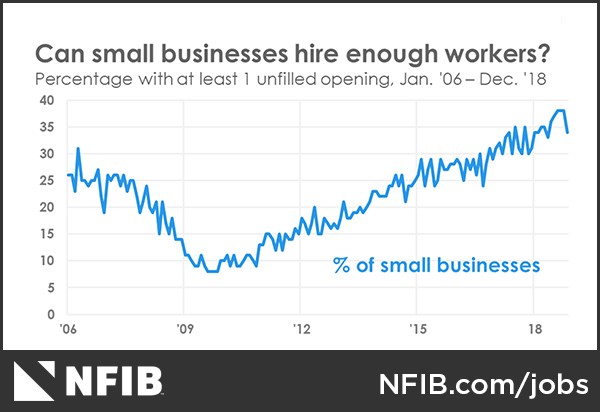 How does a lack of qualified applicants fare on compensation for existing qualified candidates? Thirty five percent of applicants increased their compensation while twenty four percent planned on increasing wages in the next three months. This is down one point from the previous survey. As a result, additional gains in wages and benefits are expected in the near future.

A full four percent of survey respondents reported higher nominal sales between August and December 2018. This is also down from the previous survey.

Fewer small business survey respondents reported inventory increases. The number reporting inventory increases three points to a seasonally adjusted three percent. This is down from the previous survey’s results, which were the second best showing since 2005.

Just what does this information mean?

Just what does all of this mean? Despite the fact that small business owners see storm clouds on the horizon, the economy is still very strong showing only a slight decrease in small business optimism over the previous period.

Most of the clouds on the horizon are man-made in the form of policy decisions by the Administration (Trade war with China and the Government shutdown) and the Federal Reserve. (Interest rate increases).

Since the clouds are on the horizon and the economy is still very strong, momentum should not slow substantially in 2019. However, the same cannot be said for 2020.

If you are looking to increase already low inventories to grow your business, consider a merchant cash advance from Zip Capital Group. We have a team of dedicated small business experts to guide you through the application process.

Apply online or contact us today to get started today.