A recent survey by Metlife and the U.S. Chamber of Commerce finds small business sentiment increases in Q4 2017

When influential groups such as the U.S. Chamber of Commerce release an index to determine sentiment of small business owners, people pay attention. The latest such Index is the MetLife & US Chamber of Commerce Small Business Index released on November 21, 2017.

As a result of increasing confidence in local economies and small business health, the index increased for the second consecutive quarter turning in a respectable 63.2. Of the xx small business owners surveyed, 63.2% have a positive outlook about their business and the small business environment in the United States.

Having gone through the report, five key findings emerge that are noteworthy as an indicator of the health of small businesses in the United States. They include:

Local economies are strong this fourth quarter. Close to a third (61%) of survey respondents report that the financial health of their company is “good. With 39% percent rating their circumstances as “very good”.

Broken down by industry, 54% of professional services firms would describe their circumstances as “very good”. In contrast, 17% of respondents in the retail industry described things as “somewhat poor” and “very poor”. Retail was the industry with the worst sentiment across the board.

The gulf is widening between the local and national economic outlook 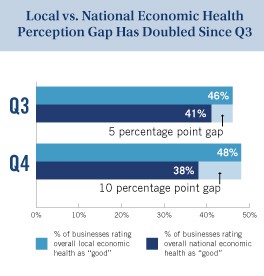 Sentiment could also be broken down by industry. Professional services firms and those with greater than 20 employees were most upbeat about the economy.

Over half of small business owners (57%) are optimistic about their revenue increasing in 2018. Those that have the most optimism are in the manufacturing and resources industry with 62% reporting increased optimism going into 2018.

Holiday sales are not “make-or-break” for most small businesses

It has long been held that the Holiday Season was when most small businesses, especially in the retail sector earned most of their revenue. This was found to not be the case across the board with the exception of retail. 55% of survey respondents categorize Holiday sales as “very important” whereas three quarters (75%) of respondents reported that revenues are the same (50%) or decrease (24%) during the period.  As would be expected, those firms reporting revenues as the same or decreased revenues during the Holiday season were professional services firms and manufacturers.

Most small businesses are not prepared for catastrophic events 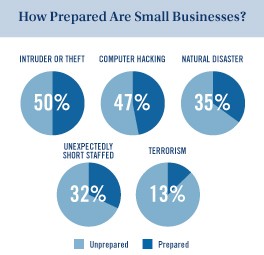 While most small business owners surveyed (68%) have never had to unexpectedly close their business, those that had, reported that the reason why was because of the natural disasters or inclement weather.

Cyber-crime was also a key concern of respondents in the Q3 survey. Of the types of businesses surveyed, 20% of businesses with more than 20 employees and professional services businesses were likely to be prepared. Businesses in the remaining industries were notably less prepared.

What are the takeaways from this survey?

The takeaways are that things are good, locally for many small businesses, so much so that they have the confidence to make investments in growing their companies. The Holidays, while important for retail businesses, is not an issue for non-retail oriented small businesses.

The final takeaway is that there more that small businesses can be doing to prepare for those unforeseen events. Whether they be cyber attacks or weather-related events, an ounce of preparation today can be the difference between success or failure when disaster strikes.

Looking to grow your business, Zip Capital Group can help with working capital financing for small and medium sized businesses in all industries.