What is the repo market and why should you care?

The repo market played a role in the Financial Crisis of 2008 and other recent crises. It touches just about every aspect of your financial life. For this reason, you should know what is the repo market and why should you care?

The repo market is a vast and significant part of the banking system that few have heard of. If you are a small business, you need to know what it is and how it can affect you.

What do the 2008 financial crisis and the lack of capital for small businesses have in common? The repo market played a central role in all these events. Taking into account increasing inflation, economic instability, and the debt ceiling debacle, it is a good idea to know about the repo market and how it can affect your business.

What is the repo market?

The repo market is where participants such as central banks, primary dealers, banks, insurance companies, industrial companies, municipalities, mutual funds, hedge funds, and pension funds buy and sell repurchase agreements and reverse repurchase agreements. In other words, it is where financial institutions convert their short-term securities to cash, and back again. The repo market is also a tool utilized by central banks to administer monetary policy, actions undertaken by the Federal Reserve to control the overall money supply and influence the economy.

It is also Primary dealers are banks that buy government securities from the Government itself for resale.

What is a repurchase agreement or repo?

A repurchase agreement (repo) is a short-term secured loan in which one party sells securities to another and then agrees to repurchase them at a higher price in the future. A repo can range from overnight to up to a year.  The interest paid on the loan, known as the repo rate, is the difference between the securities’ initial and repurchase prices.

The mirror image of a repo transaction is a reverse repurchase agreement (reverse repo). A reverse repo occurs when one party buys securities and pledges to sell them back for a profit later, frequently the next day. Most repos are overnight. However, they can also be for up to a year.

Why is the repo market important?

The repo market is vital in today’s economy and increasing in importance. There are two reasons why.

What is the collateral underlying a repo?

Assets with significant credit, or liquidity, can be used as collateral, but only for a portion of their market worth. Instead, the asset’s collateral value is typically set lower than its market value to account for risk.

What was the role of the repo in the financial crisis of 2008?

While sub-prime mortgages played a significant role in the Financial Crisis of 2008, research has found that the repo market also played an important role. According to an analysis by Gary Gorton and Andrew Metrick, the financial panic of 2007-8 was caused by a run on the repurchase or “repo” market — the key source of funding for the securitized banking system — rather than a run on monetary deposits, as has been the case with previous banking panics.

A repo enabled a form of banking in which businesses and institutional investors “deposit” money in the form of short-term interest-bearing loans with collateral as a guarantee. “Securitized banking,” according to the authors, is the development of structured bonds from bank loans, such as mortgages, that are then used as collateral for repos. They argue in “Securitized Banking and the Run-on Repo” that while securities were created from loans originating in the subprime mortgage market, the financial crisis was ultimately caused by the loss of liquidity in the securitized banking system.

What is happening in the Repo Market in 2021?

Earlier this year, concern arose when tougher regulatory standards made it harder for traders to borrow and lend desirable securities in the $2 to $4 trillion-a-day market for repurchase agreements. As a result, the number of uncompleted trades rose to an all-time high since the financial crisis. Additionally, actions by central banks during COVID-19 resulted in a drop in bond yields to near record lows, which suggests stability.

In a regular repo market, the repurchase price of securities is higher than the initial price. The difference is normally positive and is the cost of borrowing money. However, negative interest rates occur when certain Treasury assets are in such high demand or short supply that cash lenders are forced to pay collateral providers interest to obtain the securities they require. According to traders, this is one of the main reasons repo rates on desirable Treasuries recently dropped to negative 3%.

When securing Treasuries to cover repo trades becomes too difficult or expensive for the borrower, the underlying repo trades go unfinished or fail. According to Fed data, failures to deliver Treasuries have cost $65.6 billion each week on average this year, reaching $197.6 billion in the week ending June 18. In contrast, according to Federal Reserve data, uncompleted trades totaled $51.6 billion in 2013 and $28.8 billion in 2012. These are uncompleted trades PER YEAR for 2012 and 2013.

The Federal Reserve holds over 25% of all Treasuries, or $5.5 trillion. In addition, banks own over $4 trillion of Treasury and agency-related debt. As a result, fewer central-bank-owned Treasuries are available for borrowing. 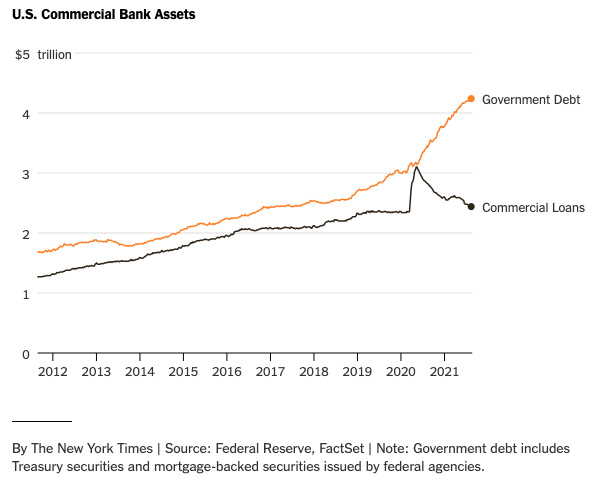 The data is showing that collateral used for repos has become difficult to come by. As a result, uncompleted trades have increased, leading, in part, to the cost of repos to increase significantly. It also means that many businesses and consumers that rely on banks for loans to fund the expenses, may have problems getting the money they need to keep their businesses and households running.

This information is significant because whatever happens

Why should I care about what is happening in the repo market?

When the Treasury market fails, it has a significant effect on the economy. When banks can’t sell their bonds for cash, they cannot meet short-term financing needs or make new loans. As a result, the capital available and borrowing costs for mortgages and business and consumer loans are affected.

The repo market is where short-term securities are converted to cash and back again. When credit becomes scarce, it becomes harder for businesses and consumers to obtain a much-needed loan. In a challenging economic environment such as in a recession, a loan may be the difference between a company remaining in business or failing.

In closing, what happens in the repo market impacts the banks. If the banks can’t get the cash they need, businesses and households will also not get the cash they need. All the big players on Wall Street are also players in the repo market. What happens on Wall Street eventually effects Main Street. In other words, it can be an effective “leading” indicator of what lies ahead for small businesses and households.

While the repo market primarily affects banks, Zip Capital Group is relatively immune to the influence of the repo market because our investors do not derive their funds from the repo market.  As a result, when things head “south”, we will be with capital available to help you grow your business.

Looking for a working capital financing, a merchant cash advance, or SBA loan for your business.  Contact us to discuss your financing needs or call (800) 795-3919 today.

How To Get Funding After A Business Bankruptcy